If you’re one of my regular readers, you’ve probably noticed that posting has been extra-light lately. Let’s face it, it’s been light for some time, but the last few weeks have been especially slow. Things had gotten stale here and I needed to shake things up a bit. I’m still trying to figure out what I’m going to do with this blog. One thing’s for sure, I will not be shutting it down. But I need to come up with a new plan. You can rest assured that the Friday Movie Quote posts will continue while I figure things out.

In the meantime, I have started a new blog. Nobody Move True Crime News will cover true crime stories in the news. I’m trying to post there at least five times a week. If it sounds like something you’re interested in, feel free to drop by and check it out.

It came to my attention over the weekend that actor Rod Taylor died last week. Taylor is best known for his role’s in George Pal’s The Time Machine and Alfred Hitchcock’s The Birds. Here’s the trailer for The Time Machine, a movie I need to watch again.

More recently, Taylor made a cameo appearance as Winston Churchill in Quentin Tarantino’s Inglourious Basterds. Here’s his scene from that movie.

There has been speculation for months now about the medical condition of AC/DC rhythm guitarist Malcolm Young. This week, we finally got an answer. And it isn’t good news.

The family of founding AC/DC guitarist Malcolm Young has confirmed the illness that forced the 61-year-old to quit the band. “Malcolm is suffering from dementia and the family thanks you for respecting their privacy,” they said in a statement, according to People.

Young’s nephew, Stevie Young, played rhythm guitar in Malcolm’s stead on Rock or Bust. He will also be filling in for the elder Young on the group’s upcoming world tour in 2015.

Wow, that’s a tough break. Godspeed, Malcolm Young. Thank you for the years of rocking awesomeness.

Now here’s something you (hopefully) don’t see every day. Police in Oklahoma, while searching the recently arrested Christie Dawn Harris (pictured above on the left), found a .22 caliber revolver (pictured above on the right) hidden in her vagina. The gun was loaded with three live rounds. Why was she hiding the gun in her vagina? Because she couldn’t use her butt crack, as it was filled with baggies of methamphetamine.

1. Where did she get ammo. I’ve been having a helluva time finding rounds for my .22.

2. I hope she was using Remington ammo. Doing so would reduce the chances of accidentally shooting herself.

3. As bad as this sounds, at least it was a small gun. I mean, it’s not like she was hiding Bullet Tooth Tony’s Desert Eagle .50 up there. 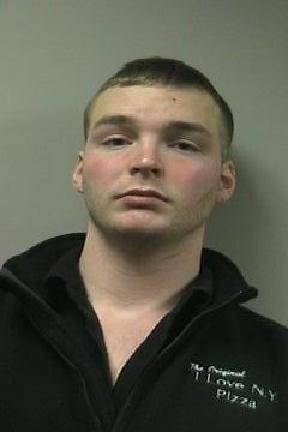 Meet Tyler Bellick, of Schenectady. Tyler is not a limo driver, and he doesn’t play one on TV. But Tyler didn’t let that stand in his way last weekend.

It seems that during a night out in Saratoga Springs, NY, Tyler had a bit of a problem starting his own car. Apparently, the court-ordered interlock device installed on his own car got a notion that he’d had too much to drink, so it strongly hinted that he should find an alternate means of transportation. And that’s just what he did.

As luck would have it, someone had left a car sitting around with the keys still inside. So Tyler decided to take it for a spin. The car, by the way, was a limousine. And it was packed with ladies out on the town for a bachelorette party. Ladies who were not happy about the unscheduled departure. Or the drunk driver at the wheel.

Fortunately, the impromptu trip didn’t last long. Carla Rinaldi, a friend of the bachelorette, put an early end to Tyler’s joy ride. Springing into action like Lara Croft in Prada, Ms. Rinaldi jumped the divider, grabbed Tyler around the neck with one hand, and knocked the car out of gear with the other. When the car came to an abrupt halt, Tyler jumped out and hoofed it out of there. With a squad of pissed-off ladies in hot pursuit. He was quickly apprehended by security personnel at the Saratoga Casino (where the incident took place), who held him until police arrived.