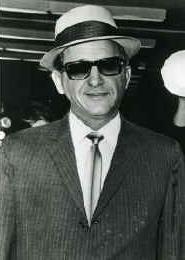 On this day in 1975, Chicago mob boss Salvatore Giancana, aka “Momo,” aka “Mooney,” aka “Sam the Cigar,” aka “Sam Flood” and aka “Sam Gold,” was killed in the basement of his Oak Park, IL home. Giancana was due to testify before a Senate panel later that month. He was shot several times, once in the back of the head, and several times in the face.