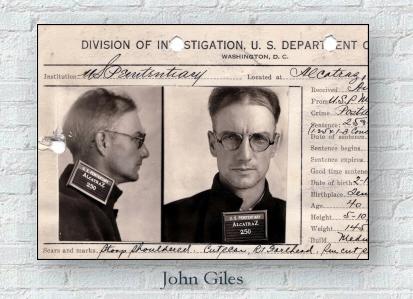 On this date in 1945, inmate John Giles escaped from the federal prison at Alcatraz. Giles, a convicted train robber, worked on the prison’s dock loading and unloading military uniforms that were cleaned in the prison laundry. Over a period of time, Giles managed to steal a complete uniform, which he hid from guards. While dressed in the uniform, he boarded a ferry carrying a forged pass and left the island, headed for freedom. Or so he thought.

Luck and math weren’t working in Giles’s favor. The guards at Alcatraz soon realized they were one inmate short on their dock detail. And the senior officer on the ferry saw that he had somehow picked up an extra soldier. When the ferry arrived at its destination, nearby Angel Island (not San Francisco, as Giles had hoped), Giles stepped off the boat and into the hands of Alcatraz guards.