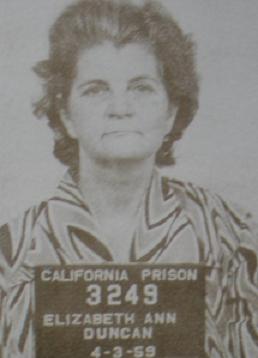 On this day in 1962, Elizabeth Ann “Ma” Duncan was executed in the gas chamber at California’s San Quentin prison. Duncan had been convicted in 1958 for conspiracy to commit murder. She had paid two men, Augustine Baldonado and Luis Moya, to kill her daughter-in-law, Olga Duncan. Olga was seven months pregnant at the time. The two killers beat and strangled her, then buried her in a shallow grave. According to the coroner, she was still alive when they buried her. The elder Mrs. Duncan’s motive was her fear that the impending birth of her grandchild threatened her incestuous relationship with her son.

Ma Duncan and her two henchmen were tried and convicted. They were all sentenced to death. Sentence was carried out for all three on August 8, 1962.  It was the last triple execution in California, and the last execution of a woman in the state before the US Supreme Court suspended capital punishment in 1972.

Los Angeles Times – The Case of a Mother’s Lethal Love