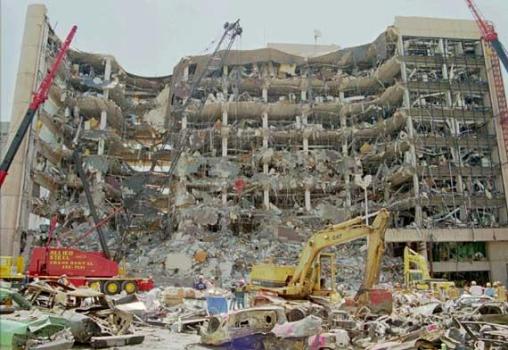 On this date in 1995, a terrorist bomb was detonated outside the federal building in Oklahoma City, killing 168 people, including 19 children under the age of six. Almost 700 people were injured.

An hour and a half after the bombing, an Oklahoma State Trooper pulled over a car that did not have a license plate. The driver, Timothy McVeigh, was arrested for unlawfully carrying a weapon. McVeigh was soon linked to the bombing by forensic evidence. The investigation led to accomplices Terry Nichols, Michael Fortier, and Fortier’s wife Lori. McVeigh, Nichols and Fortier met while they were in the Army. They were motivated by the deadly raid on the Branch Davidian compound in Waco, TX by the FBI in 1993. The bombing took place on the anniversary of the raid.

McVeigh and Nichols were both convicted of murder and conspiracy. McVeigh was sentenced to death. He was executed by lethal injection on June 11, 2001. Nichols was sentenced to life without possibility of parole. He is currently housed at the Administrative Maximum (ADX) facility at the Florence Federal Correctional Complex in Florence, CO.

Michael Fortier agreed to testify against McVeigh and Nichols in exchange for immunity for his wife and a lighter sentence for him. He was sentenced to 12 years in prison and a $75,000 fine. He was released after 10 1/2 years and disappeared into the witness protection program.

Some people believe that there were more people involved with the bombing. Theories include involvement by members of militia groups and middle eastern terrorists. The FBI dismisses these theories and considers the case closed.

Were There More OKC Conspirators?: The Elohim City Connection (Presents evidence of militia group involvement in the bombing)

JaynaDavis.com – From Middle America To The Middle East (Presents evidence of a Middle Eastern connection to the bombing)