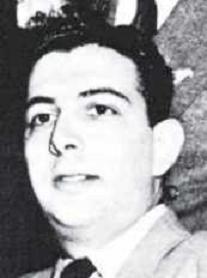 On this date in 1952, clothing salesman Arnold Schuster was shot and killed outside his home in Brooklyn, NY.  A month earlier, Schuster had been riding the subway home from work when he recognized a fellow rider as wanted bank robber Willie “The Actor” Sutton.  Schuster followed Sutton from the subway to a nearby garage, where Sutton went to work changing the battery on his car.  Schuster then tipped off the police who arrested Sutton.

Schuster’s murder was never solved.  Years later, mob turncoat Joe Valachi testified that mob boss Albert Anastasia ordered the murder after seeing Schuster on the TV show I’ve Got a Secret.*  Anastasia had no connection to Sutton, he just hated “squealers”.  Five years later, Anastasia would find himself on the receiving end of a “hit”, orchestrated by rival boss Vito Genovese, and Anastasia’s underboss Carlo Gambino.

*While researching the 1947 Holmesburg Prison escape, I recently found something that pokes a major hole in Valachi’s story: I’ve Got a Secret premiered in June 1952, four months after Schuster’s murder. If Anastasia saw Schuster on TV, it couldn’t have been on that show.